Fiji’s budget transparency score has fallen in an international survey.

The IBP said a transparency score of 61 or above indicated a country was likely to be publishing enough material to support informed public debate on its budget.

New Zealand and South Africa topped the scoreboard with 87 points each, followed by Sweden on 86.

The IBP said Fiji’s Parliament provided weak oversight during the planning stage of the budget cycle and during the implementation stage.

The survey also found that while Fiji had increased the availability of budget information by publishing an audit report online, the government had reduced information in a document supporting the executive’s budget proposal (Budget Supplement).

It said this previously showed details of projects by sector and was not available for the 2018/2019 budget.

To improve budget transparency, the IBP recommended that Fiji publish the pre-Budget statement and all in-year reports online in a timely manner.

To improve oversight, the legislature should debate budget policy before the Executive’s Budget Proposal is tabled and approve recommendations for the upcoming budget. 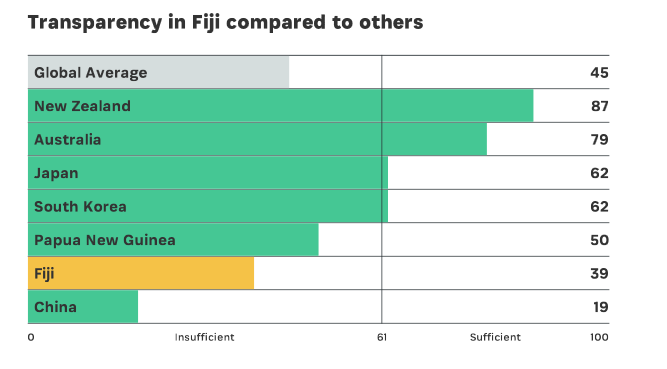 Fiji’s score is compared with other countries. Photo: Supplied/IBP

It said the proposal should be submitted to legislators at least two months before the start of the budget year.

The IBP also recommended that legislative committees should examine the budget proposal and publish reports with their analysis online.

“A legislative committee should examine in-year budget implementation and publish reports with their findings online,” it said.

“In practice, ensure the legislature is consulted before the executive shifts funds specified in the enacted Budget between administrative units, spends any unanticipated revenue or reduces spending due to revenue shortfalls during the budget year.

“A legislative committee should examine the audit report and publish a report with their findings online,” the IBP study stated.

What is the IBP?

The International Budget Partnership is an independent non-profit corporation, formerly a project of the Center on Budget and Policy Priorities in the United States.

It is based in Washington DC and is governed by a board of trustees.

According to the IBP, it works with civil society, state actors, international organizations and the private sector to promote inclusive budgeting processes.

In determining each country’s budget transparency score, the NGO measures how much a government engages with the community when it formulates its national operating budget.

The survey is based on a questionnaire written in each country by an independent budget researcher from the Citizens Constitutional Forum (CCF).

The IBP said each country’s draft questionnaire was also reviewed by an anonymous independent expert, as well as a representative of the Ministry for Economy.

Papua New Guinea was the only other Pacific country surveyed by the IBP and maintained the same budget transparency score it was awarded in 2017, 50 out of 100. 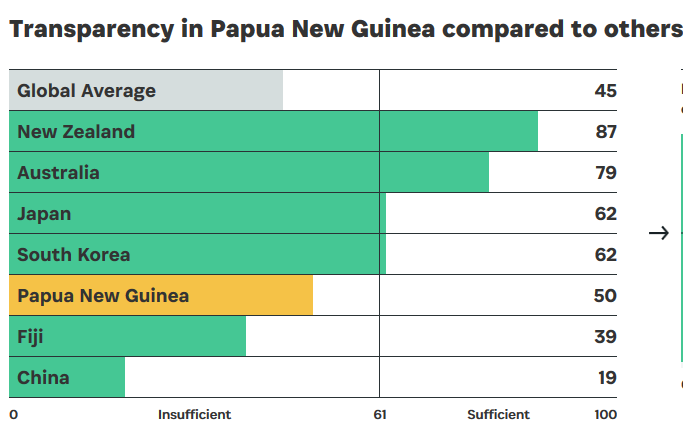 The survey found that PNG had increased the availability of budget information by publishing its pre-Budget statement online in a timely manner.

However, the IBP said PNG had decreased the availability of budget information by failing to publish the enacted Budget online.

It recommended that the PNG government prioritise publishing the budget online within three months of its enactment.

While there was a decrease in budget transparency, the report states that there was an increase in both public participation and budget oversight.